What is a Royal Charter?

In this blog post Joetta Harty examines the oldest form of incorporation in the UK, which was first intended to define the privileges and purpose of corporations.

Royal Charters, granted by the sovereign on the advice of the Privy Council, are the oldest form of incorporation in the UK.[1] The Privy, or 'private', Council is a formal body usually made up of senior politicians from the House of Commons or the House of Lords, which advises the monarch on government business that falls outside that of the departmental ministers, including issuing Orders of Council, which regulate public institutions and Royal Charters.[2]

The tradition of granting royal charters in Britain dates back to 1066, when the Scottish burgh of Tain was incorporated.[3] The first royal charter in England was issued in the 13th century to the University of Cambridge.[4] Since then, more than 900 charters have been granted by a monarch.[5]

Originally, the purpose of a charter was to create and define the privileges and purpose of a public or private corporation such as a town or city. Although still occasionally granted to cities, today new Charters are usually conferred on bodies such as professional institutions and charities that work in the public interest and which are able to demonstrate financial stability and permanence and pre-eminence in their field.[6]

The royal charter incorporating the Chartered Insurance Institute (CII) was granted on 17 January 1912 by his majesty King George the Fifth. With the grant of a Charter, an organisation becomes a single legal entity, as opposed to a collection of persons, with the same rights and powers as an individual. [7] As a result, the governing body, staff, and members of the CII benefit from limited liability in regards to the Institute's debts and legal actions. This is comparable to the level of protection afforded to limited liability companies incorporated under the much more recent Companies Acts, which originated from the 19th century.[8] 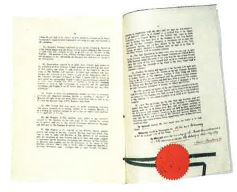 [6] "Applying for a Royal Charter". https://privycouncil.independent.gov.uk/royal-charters/applying-for-a-royal-charter/.

[7] "Applying for a Royal Charter". https://privycouncil.independent.gov.uk/work-of-the-privy-council-office/faqs/.

This blog post is part of a series of articles in which we will explore the history of the Chartered Insurance Institute by delving into our heritage collections.

In the next article, we will examine the CII's Royal Charter.